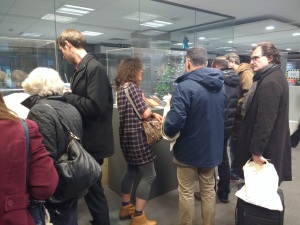 Seventeen languages are represented in addition to English: Croatian, Czech, Danish, Dutch, Estonian, Finnish, French, German, Greek, Hungarian, Italian, Latvian, Lithuanian, Polish, Romanian, Spanish and Swedish. The versions were donated by Field Officers in the respective EU Member States and are on display in three exhibition cases within the lobby of the University of East Anglia’s (UEA) library.

The DGT kindly agreed to lend the collection to UEA to coincide with the workshop conference ‘Shakespeare in Translation’, hosted over the weekend of 10-11 December 2016 by the British Centre for Literary Translation in collaboration with the British Council, Globe Education, the Romanian Cultural Institute and Writers’ Centre Norwich.

The exhibition continues until Easter 2017.