• The Snoo Wilson Prize for Scriptwriting 2017 was judged and awarded by scriptwriter Molly Naylor and Adam Taylor (Chief Executive of The Garage) at an events ceremony in Norwich on 31 January 2018. The Award, created in 2015 is in recognition of his legacy and the gift of his archive to UEA. It will expand to include scriptwriting students of Art, Media and American Studies (AMA) from 2018. Read more on our blog.
• Dr Paul Gooding and Justine Mann presented a paper on capturing digital creativity at a two day international Symposium on born digital archives, ‘After the Digital Revolution’, which was sponsored by the British Academy and which took place on 25 and 26 January at Here East in Stratford, London.

Teaching sessions held in the Archives

• AMA (Art, Media & American Studies) Teaching Visit: Feminism and Television (Kenney Papers). This session took a look at the 1974 television series Shoulder to Shoulder in which a whole episode was devoted to Annie Kenney. The portrayal of the suffragettes was discussed and the media representations of feminist histories. [19 attendees].
• LDC (Literature, Drama and Creative Writing) module on Feminist Theatres. This session also looked at the representation of suffragettes within film, television and radio; and asked questions on the usage of archive material when conducting research into feminism, theatre and history. [18 attendees]

• An academic from a Spanish University has returned for a second research visit. She is reading the Whitehorn letters and other correspondence by Doris Lessing.
• A CHASE placement continues to work on detailed descriptions of correspondence by Muriel Spark. This is assisting us with a recent enquiry from an author and lecturer regarding letters between Lessing and Spark. 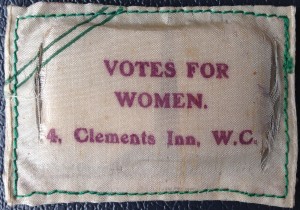 • We have provided a citation for an article on Pinner’s Suffragettes (including Elspeth McClelland) for the Transactions of the London and Middlesex Archaeological Society. The Archives supplied an account by Jessie Kenney of a human letter stunt.
• An MA student from another university is researching suffragette dress.
• A 2nd year history student from a London university is writing an essay on Annie and Jessie Kenney.
• We have been alerted to the change in repository of Rowland Kenney’s archive. Rowland was one of Annie and Jessie’s brothers. His archive has re-located from the University of St Andrews to the Churchill Archives Centre, Churchill College, University of Cambridge.
• See also ‘teaching sessions’.

A Postdoctoral Research Associate from a London university has requested a visit to further her work on contemporary literature and computing. Alderman’s works include computer games and fictional writing.

• We received a permissons request from an academic at another university for a book he is writing. This relates to the papers on Political and Economic Planning which was founded by Jack Pritchard in 1931. It later became known as the Policy Studies Institute.
• A former UEA graduate has visited to research the history of a sailing boat Nyanza, which was once owned by Jack and Molly Pritchard. The Theta Club was a Norfolk sailing club for young people set up by the Pritchards in the 1940s and still exists today.

• Heritage staff from the Forum in Norwich have visited to research the history of circuses in Norwich and East Anglia. This is part of Norwich City Council’s Circus 250 project involving primary schools. The collection contains assorted materials including chronologies on circus venues in Great Yarmouth, including the Hippodrome, and performances relating to Gilbert and Russell’s circuses.

• Assorted 20th century theatre programmes from across venues in London, and from Norwich Theatre Royal were used in a teaching session for an LDC module on Theatre and Feminism.

• A heritage consultant working for a firm of architects has visited to read papers on the architect Denys Lasdun and the early UEA development plans. This is in relation to the refurbishment of the Lasdun teaching wall.
• A creator of a website on counter-culture in Norwich norch.co.uk has been reading student journals from the late 1960s and reviewing photos and press-cuttings relating to student protests from the late 60s and early 70s.

A group of LDC students has been introduced to the recordings of the UEA Literary Festival. They will be scoping clips from this archive and from those already uploaded to e-Stream, for inclusion in LDC marketing material.

• There have been five enquiries relating to the collection of 2,000 school essays on WWII air-raid experiences, mostly from family members. In addition a UEA HIS (PGR) student is examining the essays from a psychological angle and a UG student from another university has been looking at the impact of the raids on morale and the effects experienced in Norwich.

• An enquiry has been received regarding papers and correspondence on the 1960s decision to adopt the submarine-launched Polaris missile as Britain’s nuclear deterrent.
• A student from Italy is researching the restoration of military sites built in Pantelleria, 1938-1943. Zuckerman led an assessment of the bombardment (Operation Corkscrew) on this island, and was a pioneer in the science of operational research.

A module specifically on books as material objects (The Business of Books) was held in Special Collections on 15 January. This provided an opportunity for third year literature students to examine a range of early books.